The guard tour system of the present invention is comprised of a central computer which runs a computer program that enables a variety of electronic hardware components to function as the guard tour system. As a guard progresses through a guard tour, he or she uses a touch button reader to read information stored within a plurality of touch memory buttons located along the patrol route. At the end of the patrol, the guard places the touch button reader in a downloader that transfers the stored data to the central computer which processes the data and generates reports summarizing the patrol data. The computer program of the present invention provides a novel method of organizing security information in hierarchical categories. Further, the guard tour system of the present invention uses a novel method to determine the number of times a guard visited a location in a given time period.

It helps ensure that the employee makes his or her appointed rounds at the correct intervals and can offer a virtually indisputable record for legal or insurance reasons. Such systems have existed for many years using mechanical watchclock-based systems (watchman clocks/guard tour clocks/patrol clocks). Computerized systems were first introduced in Europe in the early 80s, and in North America in 1986. Modern systems are based on handheld data loggers and RFID sensors.

Essentially, the system provides a means to record the time when the employee reaches certain important points on their tour (and, of course, the fact that they reached these points at all). Watchstations are commonly placed at the extreme ends of the tour route and at critical points such as vaults, specimen refrigerators, vital equipment, access points, etc. Some systems are set so that the interval between stations is timed so if the employee fails to reach each point within a set time, other staff are dispatched to investigate and ensure the employee's well-being.

Vintage Technologies has been supporting small businesses in the Nigeria, with clients across a variety of business sectors including education, hotels, real estate and healthcare. 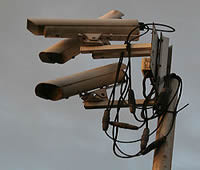 Remote surveillance is commonly used to describe observation from a distance by means of electronic equipment or other technological means. However, surveillance also includes simple, relatively no- or low-technology methods such as direct observation, observation with binoculars, postal interception, or similar methods.

We help organisations make sure they are not leaving themselves exposed to unnecessary and excessive business risk as well as the inevitable financial pitfalls.

We can call you back:

What our clients say: